Today I arrived at my language institute – Kangwon National University.

Most people got picked up at the airport, and then, after perhaps waiting for some other people to arrive, they were bussed to the University. But being in Korea already, I made my own way here and just checked in with the coordinator.

After that I was pretty much on my own. The plus is that they give plenty of time for people to get settled and rested. Some people are coming from very long distances after all. The minus is that until orientation here, which isn’t until next week, there isn’t a lot of guidance about how things work. Of course the dorm managers and program coordinators are always willing to help and answer questions.

And now about our dormitory here at KNU. Remember ESID.

First, if you are in the Korean language program stage of KGSP, you are required to live in a dormitory, at least at the beginning. There are some stories of people moving out later in the year, but I don’t know how common that is, and so far I’m not tempted to. My dormitory is less than $100 USD per month (about 100,000 won), so in terms of surving on a scholarship student’s budget it’s the best option for me. (Again and again ESID… In some places it might be cheaper to live off-campus.)

Wherever you are the dormitories will be split for men and women. In the USA it is not uncommon to have co-ed dormitories, but Korea is a little more conservative.

Our dormitory is, frankly speaking, pretty old. But, the rooms seem to have been recently renovated and they are clean.

My room is small, but functional. It has bunkbeds (not ideal, but I can live with it), two desks, a smallish closet, and a shoe cupboard (you always remove your shoes before entering the room, so you need someplace to put them). There’s one drawer at the bottom of the closet, but otherwise not a lot of room for clothes you don’t hang unless you purchase something extra (and there are cheap options, as well as some space in the room to put it). There’s not a lot of room for clothes you do hang, so it is further incentive to pack light! I will definitely be switching over the closet from warm weather to cold weather clothes as the season changes. Mine will probably go back home to Seoul (I haven’t even brought winter stuff), but if you don’t have that luxury, you can store stuff in an unused suitcase. 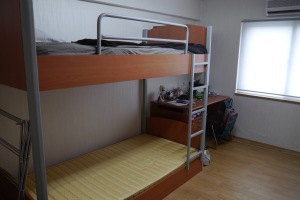 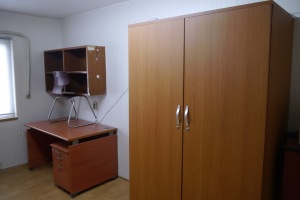 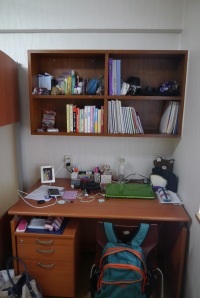 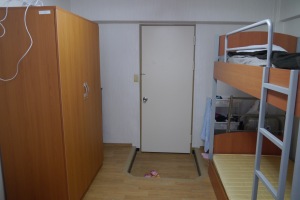 As you’ve probably noticed from the description and the pictures, I will have a roommate. Some schools have special dormitories only for foreign students, but KNU does not, or at least not for us. Some of us KGSP students are paired with other KGSP students, but my roommate will be Korean. There are advantages to both, I guess.

The floor has a room with two showers, a bunch of sinks, and one washing machine, and a separate room with 4 or 5 toilet stalls and more sinks. So, yeah, communal facilities here. I think there are schools with en suite bathrooms, but ours is not one of them. When you become a grad student in your Master’s or Doctoral program you will probably get better choices for dormitories, along with the option of living off campus. Until then, you live with what you get.

There seem to be other facilities (like computer rooms and common rooms) but I haven’t explored those yet.

There are also some rules that go along with living in a dormitory. Depending on your past experiences with dormitories, they may seem restrictive, or normal. Some of the rules here include (this is not an exhaustive list)…

My dormitory has a point system, with some violations resulting in an automatic ousting from the dormitory, and others giving between -1 and -5 points. The interesting thing is that you can also get points added (instead of subtracted) for reporting emergency situations, reporting other people’s violations, or participating in dormitory events (I haven’t been told what kind of events there are though… more on that later). If you get 8 minus points you are out of the dorm and banished for one year, so basically the rest of your language year.

So that’s where I am so far.